A few weeks after we did choose our car we had finally managed to get it registered and to pick it up at the dealer. Another trip into the vicinity of Bremen ensued to do exactly that. We picked it up, got a newer battery and once we had fueled it and checked the oil we were off. Most of the functions were working apart from the radio and some minor things.
At least that’s what we thought.
One thing was obvious though, there was something wrong with rear suspension. Even minor undulations in the road got the car into a rocking and swinging motion which nearly had you hit the roof of the car with your head. It was hilarious. As Jörg is not afraid of many things he tried to push the car to its limits in terms of speed on the motorway and it became apparent that all 224 horses were apparently still working in the engine – 230km/h for a 21 year old car is definitely not to be sniffed at.

We got back to Hamburg safe and sound and Jörg dropped the car off at Stephan Seifert, his Garagist, the guy who does all his cars. He had struck a deal with Stephan that we would only have to pay for any materials required to get the car in order and Stephan would cover the labour cost. In return we would of course advertise his shop with stickers on the car. And in the blog, obviously – so if you have a vintage or modern car bring it to Stephan for any kind of repair work, TÜV, inspection or enhancements. Very nice and knowledgeable guys and the prices are good too.
And they did find a few things:

So not too bad considering the age of the car.
Stephan and his guys did a great job and after they had finished their work we wanted to take the Fat One out for spin and test everything. So one Saturday we took the car, put our girls on the back seats and made a trip to the North Sea and visited the Seal Centre and Nursery in Friedrichskoog. 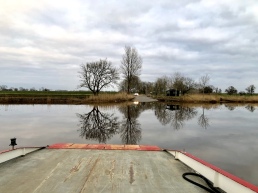 In total we were very pleased with our wagon, its comfort, space and performance. Confidence definitely became much bigger that we can do the rally and come back without any major problems or issues with the car. Blissful ignorants we were…

Things changed after the Christmas break, they were getting hot and serious at the same rate as we were getting impatient.
We needed to have a car!

It didn’t take long when one day Franz came up with this Car in Ritterhude.
On a cold Saturday morning mid-January we drove down south into the vicinity of Bremen to check out this mega-wagon. Jörg had called them a couple of times before to make sure that the car was still there and to confirm their opening hours on a Saturday morning.
The moment we arrived at this car sales yard we immediately identified it. The seller was on the phone when we approached him allegedly talking to another person interested in the car. He asked the guy on the other end to hold off with his trip from Dortmund up to Bremen until we had finished checking out the car.

We said we were interested in the car, wanted to check and test-drive it. Before the journey we had downloaded a buying guide for a W210, the Mercedes model in question. Apparently this model had some weird and quite random rust issues because it was Mercedes-Benz’s first model using water-based paint and they didn’t have the process under control right from the start. The good message was that cars which had made it until now shouldn’t be too affected obviously. We were looking under the car, inside the engine bay, under the seats, the back seats where the battery is located and so on and all looked quite OK.
Or so we thought.
Then we took it for a test drive, test drive being a big word in this case because the car wasn’t registered and didn’t have a license plate. so it was just up and down the street in this industrial area checking the brakes and whatever we were able to check in this short time.

We liked what we saw and after some deliberation we decided we would go for it. We were convinced that in this price range no car will be perfect, we will have to put some additional money into it anyway and we also thought that we didn’t really wanted to waste the next 5-10 weekends in some dodgy car sale yards only to find ourselves in similar situations. So it was a deal, which we told the seller. He then called the other guy from Dortmund telling him that the car was sold, and no, even if he was willing to pay more that the deal was already done. If that call was real or not we’ll never know. But then we didn’t care.

Here we are with our purchase, excited and proud.

Then we had to come up with a name for our new companion and after much deliberation we came up with:
“Der Dicke” – “The Fat One”.
We paid a bit more than half of the price in cash and got all the papers handed over in order to get the car registered after which we then wanted to pick it up.
We were proud owners of a Mercedes-Benz E320 and shit was getting serious now…

As soon as we decided to actually go on this adventure we started looking for what should become our mode of transport for this trip, our living room for endless hours on Nordic country roads with deep and dark forests on the left and trees on the right where the odd moose or reindeer might jump out right in front of us (rest assured, in case this happens we’ll have a dash cam to document the resulting mayhem) to give us some safety, to become our castle on wheels.

We were often thinking and pondering about the requirements for this, for our car:

The search criteria on the various used car websites looked a bit like this – and remember, the car had to be at least 20 years old and the price shouldn’t exceed EUR 2500,- by too much:

Every day we received the newest results into our inbox. However, we had agreed that we didn’t want to buy a car before 2018. So there was a lot of looking around and checking offers on the internet exchanging exotic finds, getting excited, sharing laughs etc. but no real action yet. One thing became clear, there was and is a lot of stuff out there even with our limiting criteria, so whenever we would seriously start to go out and look for a car there would be plenty to choose from.