The first night in the roof tent was really a bit of a strain. As romantic as our spot right on the sea shore was, with the wind picking up during the night the waves were really making quite the racket. This was lovingly assisted by the rain, of which there was a lot coming down, playing its own tune on the roof of the tent. Speaking of the tent. When we took it over from Franz’ friend Christoph the left side entrance’s zippers became loose. This means we can’t close it properly. We tried to fix it into place with duct tape but wind and rain made that loose too. So Jörg was sleeping right next to a gaping hole only minimally protected by the mosquito net.

To sum it up, when we were having a delicious dinner on the beach we thought camping is really underrated, when we couldn’t get a proper night’s sleep we thought it’s definitely overrated. Let’s see how we can improve this…

Leaving very early on day 2 we then headed North towards Nora in the Örebro region.

The Task of the Day was to find a car graveyard in the woods near Ryd and once there to look for what might have been ABBA’s first tour bus. Not having read the roadbook too carefully in our nonchalant and non-ambitious spirit that we are in, we thought this spot to be much further North, near Jönköping. Gliding through the village of Tingsryd we saw a road sign swooshing by that was pointing to Ryd. Ryd! We then made the necessary u-turn and followed the sign to Ryd. It wasn’t easy but in the end we found the spot and as it was still quite early nobody was there, the light was still a bit dimmed and it was raining, so the atmosphere was rather spooky and made it really special. 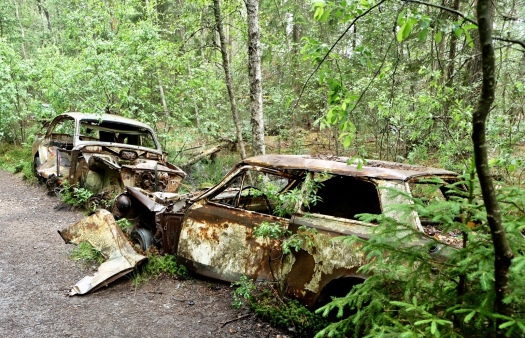 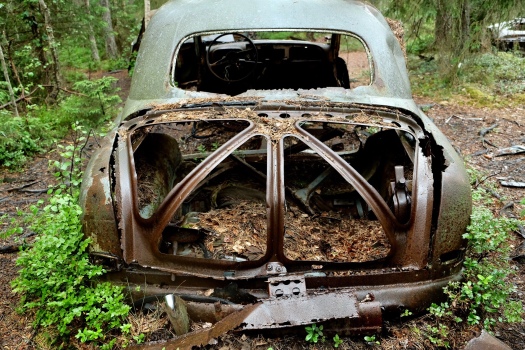 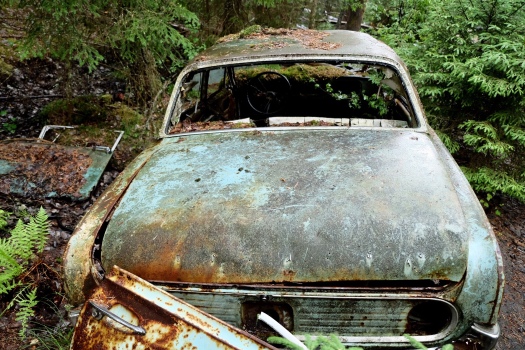 It continued to rain and our next stop was in Växjö, where we treated ourselves with a sumptuous smörrebröd in a hotel where Jörg tried to transfer the images from his camera to his iPad, which didn’t work. The iPad could connect to the camera’s WiFi but the app said it wasn’t connected and after many failed attempts he eventually gave up, feeling quite frustrated. We then put some fuel in the car, got some sweets and continued the drive further North. Still some kilometres to go. Through the relentless Swedish rain.

Our next planned stop was Jönköping on the southern shore of the Vättern, Sweden’s second largest lake. 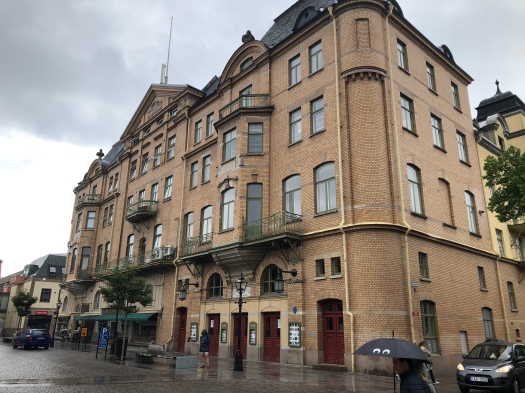 As it was still raining we didn’t spend too much time there and pointed the Fat One’s hood towards our final destination for the day, the little town of Nora, somewhere north of Örebro. After the previous night’s dreadful experience in the roof tent we had decided to rent a cabin on a camping site and enjoy proper beds and our own bathroom. At the Northern end of the Vättern we came into the vicinity of Örebro and had to avoid some motorways. We found a great, winding road for the next 50 km or so, then up into some mountains on dirt roads. We were followed by another team and had a lot of fun. We were definitely not going too slow…

We got to the camping and decided to pamper ourselves with the full monty i.e. a cabin with own bathroom and toilet. Then the rain finally subsided and the evening became quite nice, if only a bit on the chilly side. We were watching the Germany match and the wonderful performance by our team while Jörg was preparing dinner, a tomato salad and pan-fried salmon.

Later some more teams came onto the camping site and two of them joined us on our cabin’s porch for drinks and chocolate. 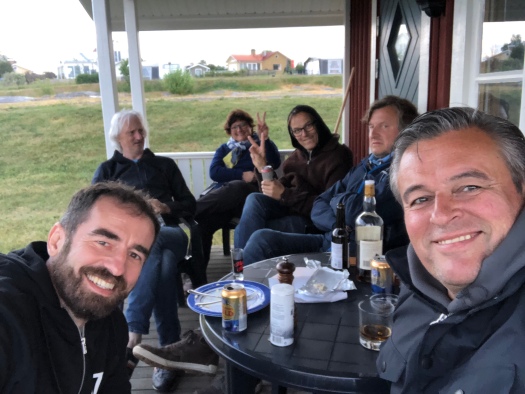 Two of the guys cam from Hamburg and it turned out that they live in the very same house Jörg’s grandmother lived in for more than 60 years and his mother, aunt and uncle grew up in – the world’s an olive!