The further North we came, and we’ve come already about 1900km as the crow flies and nearly 3200km by actual driving distance, so the further North we came the longer the days have become and by now, having crossed the Arctic Circle, the sun doesn’t set at all and the days don’t end. But with the miserable weather we’ve had so far in Norway we actually have not seen the sun, especially we have not seen the sun not setting. This of course begs the question how one can actually see something that’s not happening? Does the perceived absence of something automatically prove that it didn’t happen in reality? Or did it?
Anyway, the effect that we experience is that it’s light.
It’s light all the time.
24 hours of no darkness outside.
But what we really see is grey. A grey, all surrounding greyness, We see grey water, grey clouds and predominantly a grey sky. We see a grey that’s constantly and often only gradually changing in it’s greyness. Sometimes it’s a very light, whiteish grey, an almost light emitting grey that gives hope that the sun might come out any moment, sometimes it’s an all encompassing grey that seems to erase all colours from your surroundings, sometimes it’s a very dark grey, a pessimistic and depressing grey, that seems to want to eat your soul, sometimes it’s a grey that is hanging so low above you that you want to pull in your head for the fear of being suffocated.
This universe of grey is there all the time, 24 hours, around the clock twice, and then it just continues
What happens now is that lose your sense of time.
You don’t know whether the grey becoming darker is because the clouds have become thicker, filled with rain or because the sun actually has come down a bit. It’s confusing, it’s mindboggling, it’s playing nasty tricks with your mind. You’re sitting in a car for hours on end, the scenery changes, the light changes slightly, the grey doesn’t.
It’s just there and it doesn’t go away.
And you’re in it like in an experiment, a big hamster wheel.
And then you look on your wrist or your phone to check the time, you think you know more but you just don’t feel it at all.
You’re lost.
You don’t know where you are and when you are.

As you might have been able to gather from the previous lines the weather on our next leg up North was rather dismal. It was raining all day with only the slightest of breaks in between. It was a firework of grey.
We got up not too late and not too hungover after the party, had a shower (one of us with hot water, the other with cold water due to some usability issues), had a coffee, packed our stuff and made our way across the remaining islands of Lofoten where we could only guess how beautiful it must be here.

On our way we came across some sites where the French and Norwegians have been viciously fighting against the Germans in WW2, especially around Narvik. In this case we thought the grey was a rather befitting colour. We would see more of that on the day after; war and grey that is.

Eventually we made it to Tromsø, a city with the world’s northernmost university, strolled around, took some pictures, had a hot brew in a nice cafe and did some grocery shopping (reindeer!). From the cities we’ve seen so far Tromsø is for sure one of the nicer ones. Why cities in general in the Nordics, at least the ones we’ve seen so far are not that attractive we don’t know. Maybe it’s the rain or maybe they say the nature around us is so beautiful there’s no bloody point in competing with architecture against it. At least when the sun shines.
We just don’t know. 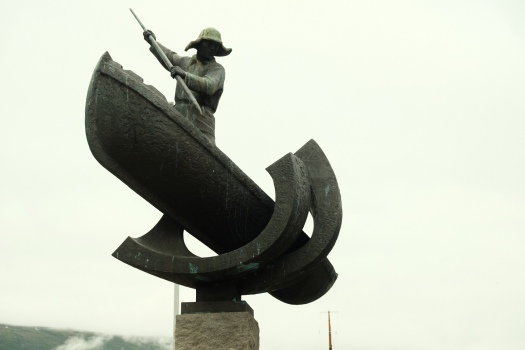 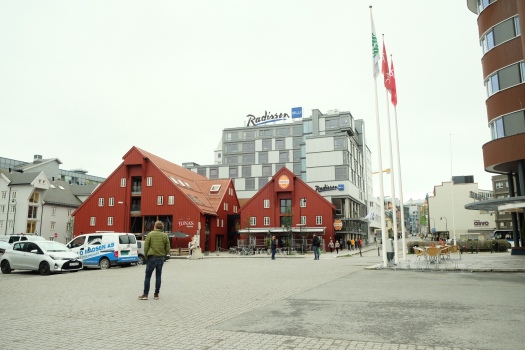 Leaving Tromsø we where hoping to drive for another 3 hours and find a camping spot, preferably with a cabin to rent so that we didn’t have to put up our roof tent. When it’s raining it’s not necessarily the most relaxing resting place. We took two commuter ferries across two fjords, the Ullsfjord and the Lyngenfjord, which was a nice break from the driving and made it to Sandnes Camping near Storslett. 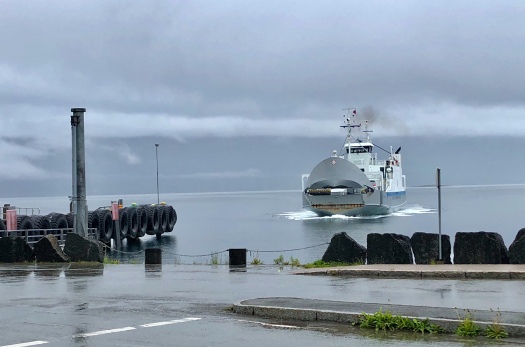 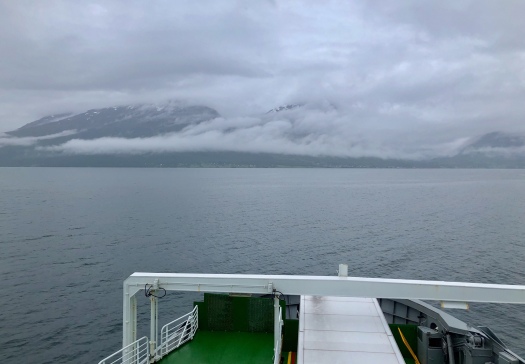 We found a camping with cabins from the very early 60s, charming but basic. The terrain was quite muddy as they are in the process of modernizing the place, which after more than 50 years might be not such a bad idea. The view was great but might have been fantastic if wasn’t for the low hanging duvet of wet greyness. We had another team visiting us for dinner, Peter and Torsten from Mobiles Nachbarschaftskommando 47 and we had juicy and tender reindeer medaillons from the barbecue with jacket potatoes and spicy vegetables. In the end some chocolate and whisky as dessert to round it all off.

This was one of the longer days, both in terms of time and distance, because we did 780 km and the journey took about 12 hours including the breaks.